JUNE 1999
Now, over to first trip. On the margins of the seminar held under the auspices of Tamil Nadu Archaeological Society held at Pondicherry, I had the chance of meeting - among many scholars and friends  - Mr C.Santhalingam of Tamil Nadu State Archaeology who informed me about a prevalence of Buddha statue at Ayiraveli Ayilur in Trichy District of Tamil Nadu, which I noted in my diary and eagerly waited for a suitable time to go over there to get the glimpse of it. That was the time when I was very particular to get information on the Buddha statues found in the Chola country and record them so as to document them in my Ph.D.thesis entitled "Buddhism in Chola country.

OCTOBER 1999
During my field visit to Karur I met my co-brother Mr Tirumurthi, who was working as a Physical Education Teacher. While I enquired him about the place he said that there was a place called Ayiraveli Ayilur, presently known as Sriramasamuthiram, in Thottiyam district of Trichy district. Programme was fixed to go over there and we went to that place in a car. During our journey we enquired about the prevalence of Buddha statue. While we were nearing the place one person said that there was no such statue. Another person said that earlier there was a statue but it was found now. 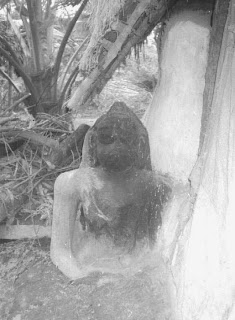 Later Mr Tirumurthi explained them about my research and the importance of the statue. Among them one Mr Thandapani Sivam understood about our study and in turn told the people gathered there about the purpose of our visit.  Mr Rajamani took us to the place where the Buddha was found. The Buddha was found like the Buddha found in Pettaivaittalai.

29.1.2012/30.1.2012
Myself and Mr. Thillai Govindarajan were returning from Ambur after attending the marriage of Mr Malayaman, son of Mr Ananthapuram Krishnamurthi. Around 12.00 midnight,  Mr Thillai Govindarajan said that two persons who were seated near were discussing about Buddha statue. (Earlier, alongwith Mr Tirukkovilur Natarajan we went to Kappalur Kunthunathar Jain temple, Renderipatti Neminathar temple, Kunnatthur Athinathar temple and other temples). I said to Mr Thillai "Yesterday we went to so many Jain temples. It is very surprising to hear about Buddha. After brief introduction we came to know that while one person was a press reporter other was from a private TV. After I informed him about my Buddha research, Mr KRK Kumar from private TV channel said that there was a Buddha near Musiri. While I told him that I have seen all the Buddha statues of the area he promptly said that it would be a new Buddha. As he said it was a new one I wanted to see the Buddha. As per plan after reaching Thanjavur I had to return to the spot.
30.1.2012
Now, over to second trip. In spite of my continuous journey for the past three days, I was left with no other alternative but to go there because of the new Buddha statue. As soon as I reached Thanjavur, without wasting any more time, I started for the field work. From Thanjavur I went to Trichy and my onward journey was on Trichy-Salem route. As per his advice I got down at Elurpatti and waited for him. Later he came there on bike and took me to Kattupputthur which was nearly 13 km from there. While going through the place I came to know that I was there during my previous trip to see a Buddha. Then we reached Ayiraveli Ayilur. We met the Mr Thandapani Sivam (aged around 80). Though he could not able to understand what we were saying, he identified me easily and informed the place where the Buddha was. On our route we enquired about Buddha but we could not get a clear picture about the location of the Buddha statue. At last we came to know that the statue was found in Adi Dravidar Street.
Within a short while we reached the spot. We met Mr Rajamani (53), who I saw during my first field trip. "This statue was found since my grandfather's days,probably more than 75 years.  We worship this statue. The statue was damaged due to felling of a tree some years back", he said. As soon as I saw the Buddha I thought about the Puthur Buddha which was under worship. He recorded the information about the Buddha and said it would be telecast within two days. I thanked him for having given me a chance to see the Buddha the second time, though it was the one which I saw during 1999.  I also thanked the locals for their help during our visit. After a heavy heart for not having seen a new Buddha, I returned to Thanjavur.

Here he grieves, hereafter he grieves. In both states the evil-doer grieves. He grieves, he is afflicted, perceiving the impurity of his own deeds. - The Dhammapada 15

STORY
A pork-butcher, named Cunda, who lived by killing pigs throughout his lifetime, was subject to much suffering in his last days. Before dying, he rolled on the floor, actually squealing like a pig. After death he was born in a woeful state.
(The Dhammapada, Narada Thera, The Corporate Body of the Buddha Educational Foundation, Taiwan, ROC, 1993)