In search of imprints of Buddhism: Field work 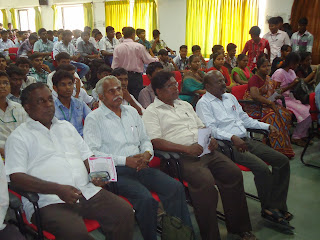 While carrying field work in connection with my study entitled Buddhism in the Chola country I got so many experiences. The area of my study was the Chola country comprising composite Trichy, composing Thanjavur and Pudukottai districts.

The first and foremost task was to select the books connected with the study. Based on the convesation with friends and other scholars, I started searching the relevant works and picked them up. They include dthe works of Mayilai Seeni Venkatasamy (1940), P.R.Srinivasan, (1960), C.Minakshi (1979), T.N.Vasudeva Rao (1979), K.Sivaramalingam (1997) and others. French Institute of Pondicherry in its collection had 16 photographs of Buddhas of this area. There were also references in History of Tamil Nadu: The period of Cholas (1998) published by the Government of Tamil Nadu. In the meantime the statues found by other scholars were also helpful. The information pertaining to thse Buddhas were collected and listed. Based on the list, field study was undertaken.
Museums
In order to collect the information about the Buddhas exhibited in museums, they were visited. Such visited museums are in Thanjavur, Pudukottai, Trichy, Karur, Nagapattinam, Tiruvarur and so on. Later the places which were referred to scholars were visited. The field work started during 1993 continues till date. Some of the experiences of the field work are deal with here.

AYYAMPET
A photograph of head of Buddha, measuring about 1' height, from Mr Ayyampet Selvaraj with a note stating that it was found on the banks of a tank in Vayyacheri in the south of Ayyampet in Thanjavur district. In spite of  many field visits to and enquiries in and around Vayyacheri I could not able to trace the Buddha. Hoping to see the Buddha in the days to come. Now, the photo is the only source to authenticate that Buddhism prevailed in the area.

ARIYALUR
While having discussion on the Buddha statues, Prof.L.Thyagarajan of Ariyalur was kind enough to inform me the places where Buddha statues were found. One such place was Ariyalur. Based on the source I visited the place and found Buddha. During subsequent field visits it was not there. Late I came to know that it was exhibited in the museum at Gangaikondacholapuram. Frequent field visits helped me to know about the shifting of the statue from one place to another.


KILLIYUR
From the article of historian Dr Kudavayil Balasubramanian, written in 1987, I came to know that there was a Buddha statue in Killiyur near Tiruppamburam in Nannilam taluk. In the article he opined that a Buddha palli pertaining to Pamburam might have existed there. I had a rare chance of going with him to the place and see the Buddha, called as Sivanar,  in1999. This field work helped me to see a Buddha which was identified by a scholar and to my surprise with him. In this case an article helped me to find a Buddha.
KUMBAKONAM KUMBESWARAR TEMPLE
During one of my discussion with (Late) Mr Sethuraman of Kumbakonam I came to know about an inscription which was in Kumbeswarar Temple. Though I searched for it in the shrine of the presiding deity, amman shrine and other places I could not able to locate the inscription. Once again I met him. At that time he gave me a copy of the inscription and informed me the exact location of the inscription. The importance of making field work after having discussions with scholars was the lesson which I learnt with this.

KUMBAKONAM BAGHAVA VINAYAKAR TEMPLE
Mayilai Seeni Venkatasamy in his work Bouthamum Tamilum (1940) says that a Buddha statue, known as Bhagava rishi, was found in a Vinayaka temple at Nageswararn Tirumanchana Veethi. He says that Baghavan was one of the names of Buddha. Quoting Nikandus he says that Vinayakan was also one of the names of Buddha and at a later date many Buddha temples became Vinayaka temples. He adds that the Vinayaka temple and the Buddha statue vouchsafe this. T.N.Vasudeva Rao (1979) confirms this in his work. This was quoted in History of Tamil Nadu: The period of Cholas (1998). While carrying field work in connection with the M.Phil., entilted Buddhism in Tamil Nadu with special reference to Thanjavur District (1995) the temple was visited and the statue was seen in person and it was recorded that there was a Buddha as told by Venkatasamy. In the meantime before submitting Ph.D., thesis entitled Buddhism in Chola country (1999), I have seen nearly 50 Buddha statues. The experience which I gained during this period helped me to clearly understand the iconographical aspects of the Buddha statues of the Chola country. It helped me to record that it was not Buddha. Only subsequent field works helped me to understand this.

GOBINATHAPERUMAL KOVIL
A Buddha statue was found in Gobinathaperumalkovil in Pattiswaram-Tiruvalanchuzhi road and was widely reported. After  seeing the newsitem, a private TV approached me. They wanted to see the Buddha. Alongwith the TV crew I went there to identify the Buddha. At that time one of the crew saw a deshaped statue. From the iconographical aspects it was clear that it was a Buddha. The involvement of accompanying persons would also help to find a statue, which I learnt through this field work.

PERANDAKOTTAI
Archaeologist Mr K.Sridharan sent me a clipping from The Mail, of 1978, which contained a photograph of a head of Buddha informing me it was found in Perandakottai in Thanjavur-Mannargudi road. Based on the clipping I went to that place and found it. It was called as Samban by locals. Though I could not able to succeed in locating the Vayyacheri Buddha, I could found the Buddha after two decades, based on the clipping.

PERUMATTUR
Based on the information that there was a Buddha at Perumattur in Kunnam taluk of Perambalur district field work was carried out. To my surprise I came to know it was Jain Tirtthankara and not Buddha. Though it was a Tirtthankara, locals call it as Buddha. No worship was done to the statue. Only field work and a clear study made me to know that it was Tirtthankara.

PETTAIVAITTALAI
During field work historian Dr.R.Kalaikkovan, among other things, informed me about the prevalence of a Buddha statue in Pettaivattalai. Based on this field work I went there and found a Buddha like a Jain Tirttankara. Later I sent a postcard informing the curator of Government Museum at Trichy about the statue. Through his efforts the Buddha was brought to the museum and was exhibited there. After some years when I went to Trichy, the Curator fondly recalled that the Buddha was brought to Trichy Museum based on the post card which I sent to him. Sharing of information with the persons related to the field helped to bring the statue to the museum.
JAYAMKONDAM
Starting from Mayilai Seeni Venkatasamy, many scholars record about dthe prevalence of a Buddha in Jayankondam. During my field study Mr.Balasubramanian helped me to find the statue, which was on a pedestal. After seeing the Buddha, he informed me that there was another Buddha. On the junction of West Vellalar Street-Konar Street he showed me a statue. It was a 20" height Jain Tirtthankara with triple umbrella and not Buddha. As I did not take my camera I could not able to take photograph of the statue. During my next trip, the statue was found missing. Locals informed that it was stolen. By not having camera I have lost a chance of documenting a beautiful Jain Tirtthankara.
.
From the above discussion it can be clearly understood that every field work taught me a lesson. The information which were found in dailies, research journals and books also help during field study. A clear understanding and continuous fiel work would yield good results, which I got during such trips.  Mayilai Seeni Venkatasamy (1940) cited 10 Buddha statues in the Chola country. As on date 65 Buddha statues have been found in this area and the credit goes to the field work and the experiences gained.