In search of imprints of Buddhism: Porayar, Nagapattinam district

Since the time of started doing research on Buddhism - 1993 - friends, scholars and well wishers used to share the information pertaining to the Buddha they saw or heard. In such a way I got an information from Dr. B.Sundaresan, who was in charge of the Director in the Tamil University Library. He said that there was a Buddha in Poraryar of Nagapattinam district in Tamil Nadu. During my field study in Nagapattinam district I saw Buddha in Buddhamangalam, Kurumbur, Kutthalam, Perunjeri, Poompuhar and Pushpavanam. I had not been to Poraryar on field work so far. I expected the day to see the Buddha. As many of the granite Buddhas of the Chola country belonged to the later Chola period, I eagerly waited to see such a Buddha.

MAY 2012
While I went on field work to Trichy I had a chance of meeting Dr.T.Nedunchezhian, who in turn informed that his student Mr K.Vetrivelan belonged to that area and there was a chance of knowing to him about the prevalence of Buddha by him there. While I contacted him and asked him about the prevalence of Buddha statue in Poraryar, he replied in affirmative confirming that it was near the  Porayar bus stand.

JUNE 2012
When I asked Mr Rajasekaran who accompanied me during my field study at Pattiswaram, he expressed his wish to join with me to Porayar. Later we fixed a suitable date and started our journey to Poraryar, on his bike. On the way we enquired about and searched for the Buddha. But neither any information was heard nor any Buddha was seen.  By this way we reached Poraryar. There we were informed that there was a Buddha statue near the new bus stand. I could not understand. Still we tried to reached the spot and were there. There we were told that there was a place called Pappayya Samathi and there was a Buddha.

Now we were in the samathi. We searched for any Buddha in that place. No trace. Later we came around the samathi. 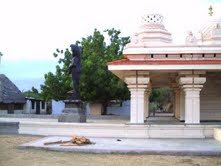 At the rear of the samathi a Buddha was found. It was not a  Chola period Buddha. It seemed as if it was set up recently. It was found standing on a pedestal. On its back a five-faced snake was found. The right hand was in abaya posture. The statue held a kamandala in the left hand. 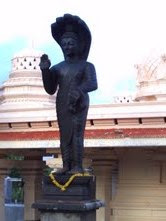 Mr.Inbarajan had this to say: "This is Jeeva Samathi of Pappayya Siddhar. As he evinced much interest on Buddha, it was set up. In order to wipe wipe out the notion - snake dosha was there along the coast - this Buddha was set up in 2011 CE, after seeing so many Buddhas of Sri Lanka. It was sculpted at Mahabalipuram of Tamil Nadu."

30  JUNE 2013
When I informed that I was writing a piece on this Buddha, Mr. Inbarajan asked me to contact his friend Mr Vinoth, who he said might be knowing much about it. Based on his advice I contacted Mr Vinoth. He felt very sorry for not having to able to meet me during my field work last year and felt much happy to share his thoughts - including the stories which were told orally in that area about the Buddha- with me. "The Buddha was of 12' height and the pedestal was of 5', totalling to 17'. During his earlier birth Pappayya Swami was a Buddhist known as Sanasta. He went on pilgrimage to many places and on one such trip he reached Poompuhar. The locals welcomed him and requested him to come to Tarangampadi, then known as Kulasekarappattinam. During the period of prevalence of Buddha vihara at Nagapattinam there was a Buddha vihara in Porayar, known as Chandikadevi Vihara. Th speciality of this vihara was it was meant for Buddhist nuns. In order to satisfy the locals, he came to  Porayar, halted there and attained nirvana. In the next birth he became Pappayya Swami and lived there. Now pujas are performed to this Buddha as per Buddhist tradition."
Though I was surprised to hear such story, as so far I have not known anything about Sanasta and Chandikadevi, I felt happy to know some new information from him. In Tamil Nadu - especially in the Chola country - I have seen so many granite Buddhas and bronze Buddhas and read about them. With this background when I made this trip I could not able to locate Chola period Buddha. In spite of that there was some amount of happiness in my mind because it was Buddha. We left the place later.

My thanks are due to:
Dr B.Sundaresan (who informed about the prevalence of Buddha), Mr.N.Rajasekaran (who accompanied me during field work), Dr T.Nedunchezhian (who shared some information), Mr. K.Vetrivelan (who confirmed about the existence of Buddha), Mr.Inbarajan (who helped during field work) and Mr. Vinoth (who gave additional information).