November 01, 2019
During our field study on 25 August 2019 we found a Buddha at Pillaipalayam in Ariyalur district of Tamil Nadu.

Alongwith Dr M.Selvapandian and Mr Ravikumar the field work was carried out. We planned to meet at the Cross road near Gangaikondacholalpuram. I arrived earlier and as there was some delay in their arrival  due to non availability of the bus, I asked Mr Selvapandian if there were any interesting place nearby. He informed me about the sculptures found in Sengalmedu which was at a distance of 1.5 km from there. By walk I reached the place and saw the beautiful sculptures there. Then I returned. By now they also joined with me.

After a brief discussion at Cross road we started searching  about the place where the Buddha was said to have been found. We were informed that from there at a distance of 3 km there was a place called Pillaipalayam (from Gangaikondacholapuram, 5 km). Some told the place name was Pillapalayam. We took an auto and started our field study. On our way we saw the Pandian lake. A very serene village. Midst of the village a a beautiful Buddha statue was found alongwith two Vinayaka statues. They were being worshipped. On seeing the Buddha statue I felt shocked as it was a very damaged condition. To my knowledge, this was the first time in the field study I happened to see such as Buddha in such condition.

After introducing ourselves to the villagers, we started to study about the statue. Some of them informed that the statue was found only upto hip portion. This reminded me the Buddha I found earlier in Thanjavur district. In February 2002 I saw two Buddha statues in a village called Gopinathaperumalkoil in Tiruvalanchuzhi-Pattiswaram, of which one was in a damaged condition. On a cursory look I came to know that there would be the possibility of finding the Buddha in full form. Later with the help of the villagers we brought the statue out. 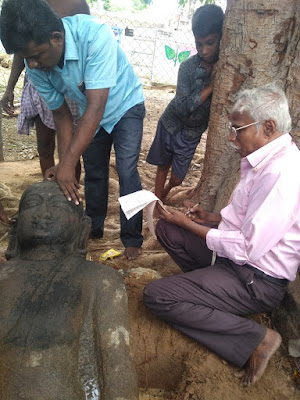 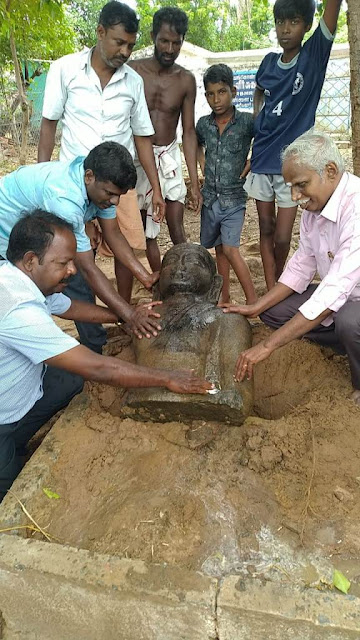 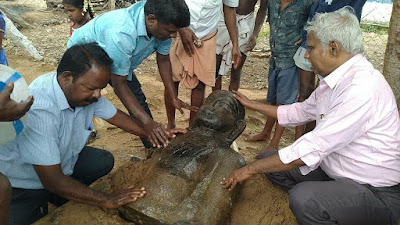 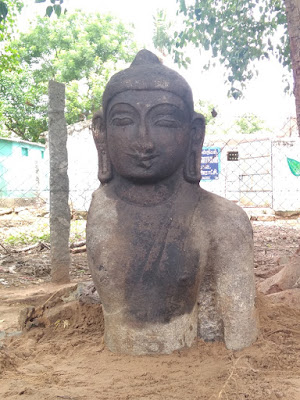 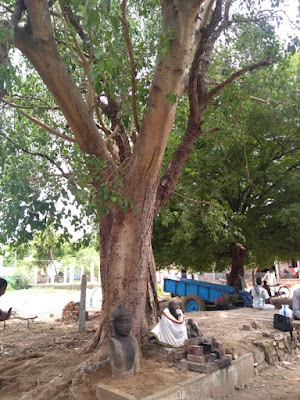 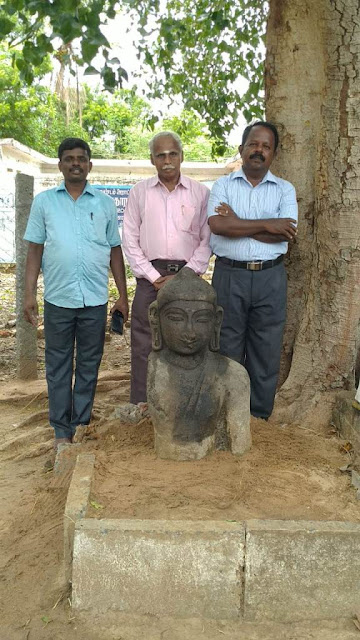 The statue was of 97 cm height. We cleaned the statue and then photographed it. The statue was found with the flame atop the curling hair, half closed eyes, elongated ears and so on. It had the iconography aspects of the Buddha statues found in the Chola country, comprising of composite Trichy district, composite Thanjavur district and Pudukottai district of Tamil Nadu. Nearly half portion of the statue was found in a damaged condition. The right hand, part of left hand were found broken. The parts of flame known as usnisha, nose and lips were also found damaged. In spite of the damaged status, the statue was worshipped by the local people. We were informed that 15 years back when banks were constructed on the Pandyan lake this statue was found and they kept the statue under the peepul tree and started worshipping the Buddha.

For my doctorate and on completion it, during the field study carried out by me for the past 25 years I found Buddhas in sitting posture in Ariyalur, Jayamkondam, Keelakulathur, Kuzhumur, Suttamalli, Muthuservaimadam, Peria Thirukkonam, Rayampuram and Vikramangalam in Ariyalur district of Tamil Nadu. This Buddha was also found on the style of these Buddhas.

After taking other particulars about the Buddha statue, we kept it as found earlier. After requesting the villagers to place the Buddha on a small pedestal and thanking them for their wholehearted cooperation, we left.

My thanks are to: