In search of imprints of Buddhism : Rajendrapattinam, Tamil Nadu

September 01, 2018
13 May 2018
One of the readers of my blog 'Buddhism in Chola country' Mr Selvakumar of Sirkazhi, Tamil Nadu informed me that he came to know about the missing of the Buddha in Rajendrapattinam and requested me to send him the photograph of the statue. I informed him about the finding of the Buddha in 2007 during the field study carried out with Mr Ananthapuram Krishnamurthi and also told him that I would be sending the relevant newspaper. 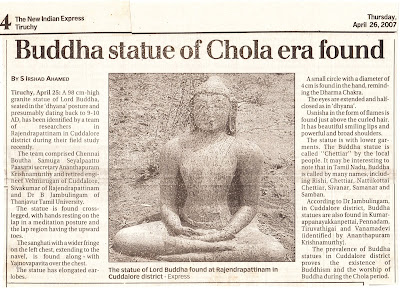 14 May 2018
The next day, another reader of my blog Mr Arul Muthukumaran posted in the wall of FB about his visit to the place and having learnt about the missing of Buddha two years back and the discussion he had with Mr Tiruvalluvan. 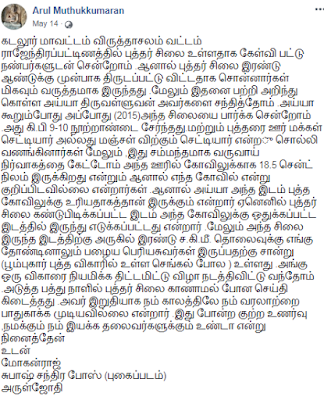 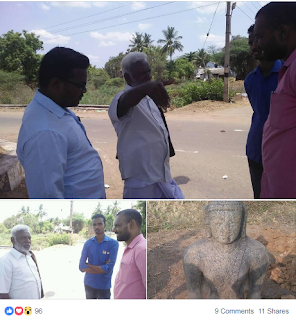 Since the beginning of my research, in 1993, I have seen many Buddha and Tirtankara statues in the Chola country comprising of composite Thanjavur, composite Trichy and Pudukottai districts of Tamil Nadu. Though not my area, due to the involvement of my friends and other scholars I could able to identify Buddha statues in Sundarapandianpattinam of Ramanathapuram district (2002) and Rajendrapattinam in Cuddalore district (2007).

April 2007
Alongwith Mr Ananthapuram Krishnmurthi and his team, during the field study in April 2007,  I saw the Buddha statue in Rajendrapattinam at Vridhachalam taluk of Cuddalore district in Tamil Nadu. The granite statue with a height of 98 cm and breadth of 56 cm was found in sitting dhyana posture, as the statues generally found in the Chola country. With 98 cm height and 56 cm breadth, the statue was in  sitting posture, as other Buddha statues in the Chola country comprising of composite Thanjavur, composite Trichy and Pudukottai district of Tamil Nadu. It had elongated earlobes. Dharmachakra was found in the hand. The eyes are extended and half closed as in dhyana. Ushnisha in the form of flames are found just above the curled hair. It has beautiful smiling lips and powerful and broad shoulders. The statue was found with lower garments. The Buddha was called 'Chettiar' by the local people. It might be interesting to note that in Tamil Nadu Buddha was called by many names such as Rishi, Chettiar, Nattukottai Chettiar, Sivanar, Samanar and Samban. 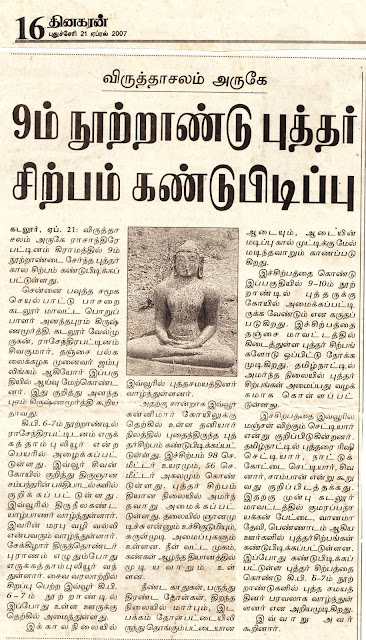 The finding of Buddha and the information pertaining to the statue was widely published in newspapers. It was pity to note that the Buddha identified in 2007 was missing now. This proves the tendency of not protecting our cultural symbols. As these are the sources which help to study the prevalence of Buddhism and its history, awareness should be created among the public and steps should be taken to protect the remaining statues.