The study on the prevalence of Buddhism  in Tamil Nadu began in 1940s. Mayilai Seeni Venkatasamy (1940), Ramachandran (1954), Srinivasan (1960), Minakshi (1979) and Vasudeva Rao (1979) have identified more than 20 places in the Chola country where Buddha statues were  present or Buddha  viharas possibly existed. French Institute of Pondicherry has,  in its collections,  the photographs of 16 granite Buddhas belonging to the Chola country, In the work entitled Tamil Nattu Varalaru : Chola Peruvendar Kalam (900-1300 AD), (Tamil) (Vol.II), (1998), published by the Government of Tamil Nadu, 19 places with Buddha statues are mentioned. So far, 65 Buddha statues have been found by the author, during field study from 1993 to December 2009, in the Chola country comprising of the present Thanjavur, Nagapattinam, Tiruvarur, Thiruchirappalli, Karur and Perambalur  districts (Jambulingam, 2002).
This article deals with the resurvey of Buddha statues found in Pudukottai district between 1993 and 2009.  It points to the fact the statues are being stolen by unknown elements and calls for an immediate actin to preserve them.In Pudukottai district Buddha statues were reported in six places namely, Alangudippatti, Chettippatti, Karur, Sundarapandianpattinam, Vannichipattinam and Vellanur. Besides, a Buddha statue, in seated posture, from Muthuservaimadam of Ariyalur district is exhibited in the Government museum of Pudukottai.

Alangudippatti
Mayilai Seeni Venkatasamy (1940: 51) reported a Buddha statue measuring three feet and six inches high in Alangudipatti. Minakshi (1979: 103) and Vasudeva Rao (1979: 271) also reported  about this find. However, during the field work no Buddha statue was found in and around Alangudipatti by the author. Only a Jain statue of about forty inches was found in the nearby area known as Kottaimedu. This Jain image is called as Sivanathar by the villagers. It is noteworthy to mention here that,  during field study many Jain statues were found in Pudukottai district and some of them are also exhibited in the Government museum, Pudukottai.
The survey points to the fact the Buddha statue reported by the scholars as late as during 1979 is missing for unknown reason.

Chettippatti
Mayilai Seeni Venkatasamy (1940: 51) also reported a Buddha statue in Chettipatti, in Kulathur taluk having a height of three feet nine inches. C.Minakshi (1979: 103) and Vasudeva Rao (1979: 271) too reported about this image. Minakshi adds that it is not unlikely that the Ainurruvaperumpalli mentioned in an inscription of the village refers to a Buddhist monastery of five hundred students which must have existed there in the early centuries of the Christian era and the mound called the Samanarkundu if cleared might bring to light more remains of Buddhism. However, during the field work no Buddha statue was found at Chettipatti or nearby areas by the author. 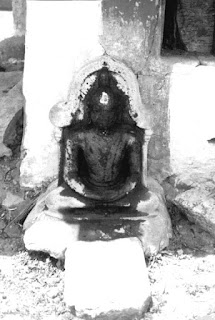 Srinivasan (1970: 99) reported that a Buddha, with a height of two and a half feet,  was  found at Karur five miles to the west of Ponpatri in Arantangi taluk. This was found by him in the tank belonging to the Sasta and Kali temples at the village where he had been in 1953. He reported "This is a small but beautiful figure seated in the usual dhyana posture. It has around it, the prabha on pillars. The other features of it are unmistakably in the late Cola style. It must be noted here that the village of Karur, as given above, is very near Ponpatri, the birth place of the famous Buddhamitra, the renowned author of the Virasoliyam, which is a treatise on Tamil grammar. He lived in the 11th century AD and is said to have written this work during the rule of the Chola king Vira Rajendra. The existence of this image in a nearby village, the reported existence of images of this kind in several other villages in the neighborhood, and the late Chola style of this image, all go to show that Buddhism was undoubtedly in a flourishing condition in this area during the Chola times, which furnishes an additional evidence in support of the theory that Buddhamitra hailed from Ponpatri” (Srinivasan 1960: 99).

Ramachandran (1954:10) discussed the possibility of structural vestiges in Ponpatri. Raja Mohammad (1992:269 & 2003:13) based on iconographic features, attributes, this statue to the Chola period. During field work, the statue was found at the Nilavalamudaya Ayyanar temple. It is learnt that the local people used to offer sacrifice to the main deity known as Karuppasamy. To avoid direct view of animal sacrifice , the  villagers kept the Buddha statue separately since Buddha preached non-violence. Alongwith other deities, this Buddha is worshipped here. Similarly it is noteworthy to mention here that in the Aravandi Amman temple of Mangalam in Trichirappalli district the villagers have constructed a separate shrine for the Buddha found there, as they were not comfortable in performing animal sacrifice in front of the sculpture.

Sundarapandianpattinam
A Buddha image was was found by the author in the Ekambaresvarar Kamatchiamman temple in Sundarapandianpattinam during the field trip in 1999. Raja Mohamad (2002) who identified this Buddha says that “A rare Buddha statue in standing posture has been discovered at Ekambaresvarar Kamatchiamman temple at Sundarapandianpattinam, a coastal hamlet on the border of Pudukottai and Ramanathapuram districts. It is believed that the statue was brought from a ruined structure, nearby a mandapa  which bears a resemblance to a Buddhist monastery. The stone idol is similar to the ones found at Nalanda in Bihar, the great Buddhist centre. The Buddha wears a close fitting robe extending from the neck to the legs, in addition to a sangati, covering the back, whose end has elegant folds. The face is oval with the nose, lips, chin and eyes exquisitely chiseled. The earlobe is long, the forehead has a tilak and on the right palm is a diamond-shaped mark-features considered Mahapurushalakshana in Buddhist mythology. The hair on the head is studded with knot surmounted with a tapering flame called usnisha indicating the supreme knowledge”. This statue is not under worship now. But it is placed near the sanctum sanctorum of temple. This statue resembles the style of Nagapattinam Buddha bronze. This is the only Buddha statue found in standing pose in Pudukottai district. 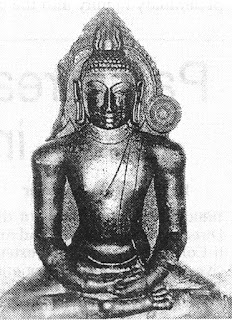 A four-and-a-half-feet high Chola period Buddha was discovered by Raja Mohammad (2002) during field study at Vannichipattinam a hamlet of Kottaipattinam close to Arantangi in Manamelkudi taluk.  He quotes thus, “It was unearthed from a paddy field referred to as Seenan thidal. The Buddha seated cross-legged in a meditation posture has usnisa on the head. The face is exquisitely chiseled and the ear lobes are long. The existence of a few similar sculptures is said to have been reported by local people in sites around these places which would mark Arantangi and neighborhood as a flourishing Buddhist in the 10th - 11th centuries AD". This Buddha image is missing when Raja Mohammad visited the village recently in 2009.

Vellanur
Mayilai Seeni Venkatasamy (1940) reported a Buddha statue in the southern part of cutchery in Vellanur. Minakshi confirms that Vellanur also called Vellianallur situated at a distance of six and a half km from Pudukottai contains an image of the Buddha lying near the vattam cutchery and says that further investigation would reveal more images. Vasudeva Rao (1979) also reports about the same image.  The French Institute of Pondicherry has a photograph of Buddha, marked Vellanur, in its collections. Quoting Mayilai Seeni Venkatasamy, this statue has also been mentioned in the book published by the Directorate of Tamil Development [Tamil Nattu Varalaru: Chola Peruvendar Kalam (900-1300 AD) (Tamil)., p.614. In this work the place name is mentioned as Vellalur instead of  Vellanur]. During field study, no Buddha statue was found in Vellanur by the author. Local people informed that there was no Buddha statues for the past 40 years in and around this area. Hence it can be inferred that the statue has been missing from early period. 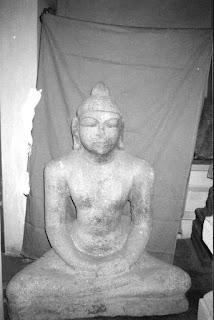 A Buddha statue from Muthuservaimadam at Udayarpalayam taluk in Ariyalur  district is exhibited in the Government museum, Pudukottai. This was the only Buddha statue found in this museum. It has a height of 125 cm. It is found with curled hair and usnisa. With wide chest and gigantic shoulders this may be one of the biggest statues found in the Chola country. The statue which belongs to the 11th century AD is with poor workmanship. The smiling face which is generally found in the granite Buddhas of this region is missing in theis image. Based on the records, Raja Mohammad observed that it was taken from Muthuservaimadam near cross road in Jayamkondam during 1977.

Pudukottai district which was famous for its Jain monuments through the ages also had Buddha statues in many places such as Alangudippatti, Chettippatti, Karur, Sundarapandianpattinam, Vannichipattinam and Vellanur which was confirmed by the studies undertaken since  1940s. No Buddha statues are found in Alangudipatti, Chettipatti and Vellanur implying either they are missing due to lack of awareness in preserving our cultural heritage or vandalism. Against this backdrop Buddha statues found in Kaur and Sundaapandianpattinam also need proper maintenance.  While Karur buddha was in seated posture, the Sundarapandianpattinam Buddha was in standing posture. Buddha of Vannichipattinam which was unearthed in 2002 is missing now. A Buddha statue, in sitting posture, belonging to Muthuservaimadam of Ariyalur district is exhibited in the Government museum of Pudukottai.   Presence of  such Buddha statues proves the existence of Buddhism in this area. However, proper attention has to be given to preserve the images by making public understand the importance of the rich cultural heritage.
* Published in Tamil Civilization, Vol.23, Oct-Dec 2009, Tamil University, Thanjavur,Tamil Nadu, India. 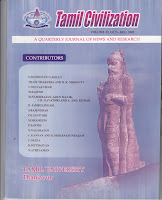