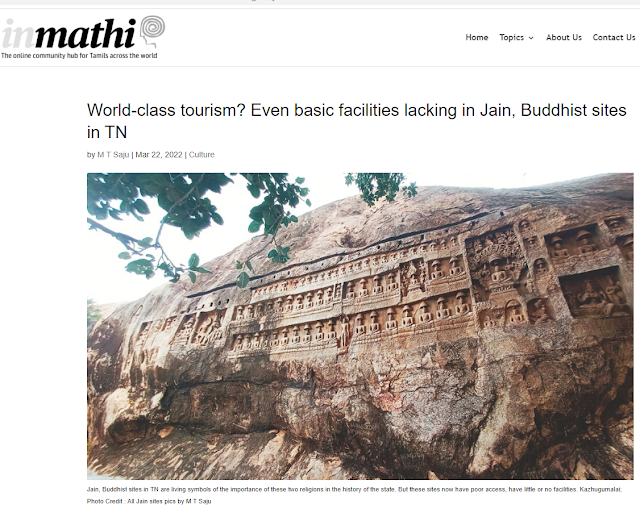 Jainism was once popular across today’s Tamil Nadu. The abandoned and neglected Jain monuments across the state stand testimony to it. In 2018, two Jain scholars published a guide to 128 Jain temples and monuments in the state. Prepared by scholars K Ajithadoss and Rajendra Prasad, the “Tamil Nadu Digamber Jain Temple Tour Guide” had basic details about the temples and how to plan a visit to them. Lack of awareness among the Jains about the sites was the reason that provoked the scholars to bring out the guide.

There are more than 130 Jain monuments and temples across Tamil Nadu, but 80% of them face serious threats due to vandalism and lack of care. Even though the ones maintained by the Archaeological Survey of India (ASI) follow some basic courtesy to the tourists, others including those under the control of the Tamil Nadu state archaeology department lack basic facilities for those who visit the sites.

The cases of the Buddhist sites are no different. According to Thanjavur-based Buddhist scholar B Jambulingam, Buddhist viharas existed in Poompuhar and Nagapattinam in Chola Nadu. The Nagapattinam Buddha bronzes are exhibited in museums in India and abroad. Buddha sculptures are found at Brihadeeswara temple in Thanjavur, Airavateswarar temple in Darasuram and Mahalingaswamy temple in Thiruvidaimarudur.

There are more than 130 Jain monuments and temples across Tamil Nadu, but 80% of them face serious threats due to vandalism and lack of care.

An inscription found in the Kumbeswarar temple in Kumbakonam, according to Jambulingam, records the existence of a Buddhist temple till 16th century CE. Buddha temples are today found in Peruncheri (Mayiladuthurai) and Buddhamangalam (Nagapattinam). In some temples, Buddha statues are being worshipped even today. But not many know about it due to lack of awareness. While presenting the Budget 2022-23 on March 18, Palanivel Thiaga Rajan, minister for finance and human resources, said, “There are several renowned sites of Jainism and Buddhism in Tamil Nadu. In order to explore these places, world-class tourism facilities will be created in collaboration with private players in districts like Kancheepuram, Tiruvannamalai, Nagapattinam, Karur and Madurai.” The scholars are happy with the promise made by the minister on TN Jain, Buddhist sites, but they are wondering how it is going to be implemented.

At a time when the government is struggling to maintain the Jain monuments under its control, how is it going to create world-class tourism facilities with the help of private players?, they ask. “The idea sounds good, but I don’t know how it is going to be executed. Jain sites like the ones in Kazhugumalai in Tuticorin district lack basic facilities for tourists. An ancient cave below the famous bas relief of the Tirthankaras in this prominent Jain monument is today home to bats. The ideal thing is to first take care of the existing ones by providing basic facilities to the tourists who visit those sites,” said Ajithadoss. Maintained by the department of archeology, government of Tamil Nadu, the bas relief at Kazhugumalai has three rows of more than hundred Tirthankaras seated on a lotus pedestal. But there is no information board or brochure mentioning the significance of the place available here. Jain temple and cave complex in Tirumalai, a remote village situated in Polur in Tiruvannamalai district.

The Jain temple and cave complex in Tirumalai, a remote village situated in Polur in Tiruvannamalai district, was once a prominent Jain centre. The cave temple and other temples in the hill complex are maintained by the ASI. The site has a 16.5-foot-tall rock sculpture of Neminatha (the 22nd Tirthankara of Jainism), the tallest Jain sculpture in Tamil Nadu. No brochure or information guide is available. An elderly watchman is the only source for those who visit this site, which underwent renovations a number of times since the 9th Century AD.

Many Jain sites lie neglected across Tamil Nadu. In 2014, a group of Jain scholars and activists did what the government couldn’t do. They started Ahimsa Walk every month to the remote villages to reclaim the neglected Jain idols and monuments across Tamil Nadu. The walk became popular as it helped create awareness among people about the historic and cultural significance associated with the Jain sites in Tamil Nadu. “We still conduct Ahimsa Walk every month to the abandoned and neglected Jain sites in Tamil Nadu. Even though the pandemic brought in a stumbling block, we have resumed it now. The walk helped us reclaim the site and create awareness among people about it,” he said.

Tamil Jain volunteers have formed groups. Each group has been preserving the idols of Tirthankaras found in various places. Jain priest Jeevakumar has recovered more than 30 sculptures of Jain Tirthankaras from various parts of Tamil Nadu, mostly from Kancheepuram. The ruined sculptures of the Tirthankaras are a picture of apathy. “The government or the ASI is yet to take care of many abandoned Jain monuments. Despite repeated demands, no one comes forward. The state government gives importance to only excavations,” said Jeevakumar.  “We were able to construct a shelter for each Tirthankara idol that we found. Pooja is performed there every week. The local people are now aware of its importance,” said Jeevakumar. Since 1993, Jambulingam has been to many places in Chola Nadu. Ancient Buddha sculptures have been found during his field study. Buddhist remnants are found in more than 70 places, of which granite statues are found in nearly 60 places. Some Buddhas are found without heads. In some places only the head of the Buddha is found. It is a pity that some sculptures that he documented during his earlier trips were found missing when he revisited the site.

A Buddhist ‘vihara’ or temple might have existed where the Buddha sculpture is found. “As these might have been nearly 1000 year old, awareness should be created among the people to keep and protect the Buddha sculptures in the place where they were found. A high rise platform with a roof should be made and the statue should be placed on it. A brief about the statue may be kept in front of it and it should be declared as a protected archaeological monument. Easy access will help the tourists visit the spot,” said Jambulingam.

In many places, headless Buddhas are found and in some other places only body portions are found. “Many sculptures of Buddha that I documented are missing today. The government must ensure that such incidents should not happen in future. The places where Buddhist remnants are found should be linked together, and a Buddhist circuit could be formed. It will help the future generations to know the history of Buddhism and protect the remnants,” he said.

Jain, Buddhist sites in TN are living symbols of the importance of these two religions in the history of the state. It would take more than a promise to truly bring them to live and establish their significance.